Sometime in my very late 20s or perhaps even very early 30s, I came to the realization that most of my most critical life decisions had never truly been taken after considered deliberation, at least nothing remotely resembling the  “should I this or should I that” decision-paralysis that I find myself being afflicted by before every purchase of a fairly expensive consumer durable. I studied engineering, not because I particularly wanted to or felt it was a good fit for my skill sets, but because that’s what “all the good boys do” (There was medical also, but then I found cutting toads yucky). When it came time to do a PhD in the US, I again went with the flow. All my smart friends had taken the same decision and well, all of them couldn’t be wrong. Whether five-years of poorly-paid slogging away at impossible problems aligned well with how I defined the concept of “reward”, I never gave a second’s thought. Getting married at the age of twenty-five was also something very impulsive,  how impulsive  I realized a few years later when the rest of the curve caught up with me and I heard stories, perhaps apocryphal, of “arranged-marriage-tours”, meeting one prospective match for lunch and one for dinner, and Excel sheets with SWOT analysis of matrimonial candidates.

I did not regret some of the decisions taken without thought, and even the ones I did regret none gave me as much grief in retrospection as buying a Sony camcorder in 2000. But I did regret how cavalier and ill-considered the process that led to these life-critical decisions had been, how little of the way I am that had been factored in to the choice of the path to take.

And so I was determined not to repeat this mistake of mindlessly checking off a box in a checklist when the next big fork in the road came.

Which was when to have a child.

The pressure to have one had slowly been increasing for me and my wife, in the ominous 10-dot-balls-in-a-T20 way. What started out as precipitous conversations like “So-and-so just had a baby daughter, he got married three years after you did…remember?” that just happened to spring up when we were in the room soon graduated to straight hits down to the fence like “So when are you thinking about starting a family?” I have always been tempted to ask why is a married couple not already a “family” just I had been tempted once to retort to a “When will you two become three?” with a “Our religion does not allow two wives, aunty”. But then I have come to realize, through bitter experience,  that it is better to duck some bouncers than to try to hook them. But perhaps not all. Like the time I thought I had given a razor-sharp repartee to one half of a well-childed couple about my age (“Don’t you like children?”) with a “I love children and wives as long as they are other people’s”. I know I was being flip, perhaps even off-color, but the pressure was getting to me sometimes, the albums-full of new-born pictures of the guys I went to school with, and the facebook status updates. But more the pressure, the more determined I became.

To think this through.

Which is of course, fancy-speak for kicking the can further down the road. There was always time to start a “family”, we would tell each other. Next year. After the book is released. After this. After that.The core of this reticence was fear. Fear  that I would not be a good parent. Fear that I would not measure up. Fear that just like I had blamed most of my problems on my parents and on Nehru, my child would do the same and might, horror of horrors, even take Nehru out of that list. And perhaps, though it might be considered by some to be shamefully selfish to accept this,  fear of change, of changing a lifestyle that I have become accustomed rather pleasantly to—-of late mornings on weekends, being able to leave home when I like and return when I want, of “Walking Dead” marathons and the simple pleasure of scheduling my life around what I felt like doing.

Till the stage was reached time-wise when the question was approaching the stage of not “when” to have a child but if to have one.

And the moment the question was framed like this, the answer was crystal clear.

The fear of being a father was nothing compared to the fear of never being one.

And so I became a parent, on January 12th at 8 pm, a parent perhaps of the type I always dreaded, you know the one who sits besides you on a plane with his child with the “Adjust please or else you are a curmudgeon” attitude , the one who counts the “Likes” on his child’s pictures on Facebook, the one who looks at married-and-yet-without-child couples with a glance of quiet judgement, the one that scares parents-to-be with a knowing “Enjoy your sleep for the last time in your life”, the one that fraternizes socially only with couples that have children in the same age -group, the one that wears their daddy-status like a badge of pride.

As the doctor handed me little Anahita  [For those interested, this is what the word signifies, the first alphabet of Anahita is from my name, her last three from my wife’s and one of her shrines is in Shehr-e-Ray or City of Rays], I was even more bewildered than the little ball of human-hood that looked back at me. True to form, me being me, a kaleidoscope of images arranged and re-arranged themselves in my pop-culture addled brain, of Alok Nath’s tremulous “Beti ghar ki laxmi hotee hain Radheshyamji”, of the opening bars of “Krishna Krishna” as twin-Anil-Kapoors are born in “Kishen Kanhaiyya”, and a gender-neutral rendition of Gunda’s famous “Pita pe Poot, Baap pe ghoda, Kuch nahi to thoda thoda…”  as I found myself saying, standing in that twilight zone of happiness, fear and hope :

“So many stories I have to tell you. And so many things you need to teach me. ” 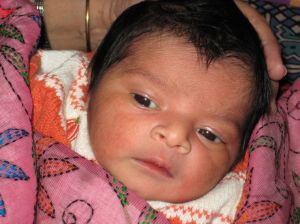