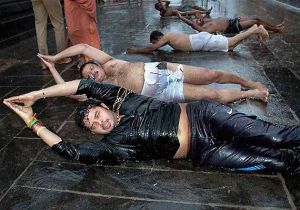 Goodbye Santa-Sree. And don’t let the slap or the love hit you on the way out.

Cause the way things look right now, we won’t be seeing you no more. At least for some time.

To be honest, I am going to miss you. That butt-shimmy. That simian snarl. That slow clap-taunt when the batsman hit you all over the park. That “Look at me… I am a preening peacock” pose for the cameras, those rare occasions when you got a wicket. That “swinging bat like a helicopter” run down the pitch, those rare occasions your bat touched the ball. That self-effacing Charlie Sheenish “Do you know who I am? I am the greatest ! I am better than you !!” modesty that we have seen time and again. That unique ability to be hated not only by your opponents but also by your teammates.

But what is this now I hear? Spot fixing? You? I would never have guessed. As a matter of fact, I refuse to believe such a thing could have happened. It must be, as the Malayalee papers have said a sinister conspiracy of   “the North Indian lobby, led by the leading ‘Aryan’ MS Dhoni, which apparently has been thwarting Sreesanth’s career since Harbhajan’s still inadequately explained slap of 2008”. Those North Indians, I tell you. First they made Shakeera more famous than Shakeela. Now this. 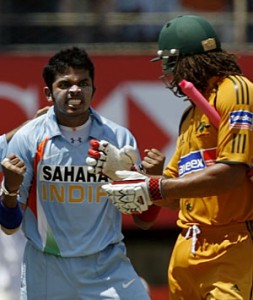 What about this Jiju Janardhan chap the press is talking about? Fiction. Who has a name like Jiju Janardhan…tara rum pum pum pum? This was possibly the second most ridiculous thing I heard this week. The first being that to stop spot-fixing, players need to be counselled and mentored, as if the basic problem is that these “nanha munha-s” do not know that fixing is a crime against the game. (Reminds me of that line of Chutiya from Gunda: “Rape karna kya budi baat hai?”)

If there is one silver lining from all this, it’s that we fans came to know so much about you. You were arrested with a woman. That you were going to be married to a non-Keralite. And that you bought an expensive phone for your girl-friend. Total stud you are.

Not that we have any doubts.

If I have any doubts, its regarding what is being said. I can understand no-balls like Mohammed Snape Amir’s. They are totally in the bowler’s control. But how can bowlers make sure that an exact number of runs, (give or take one or two) are scored in a particular over? And if some bowlers are this precise and in-control of the game, why cannot they be better than freakshows on the fringe of selection?

What’s not puzzling is that Santa-Sree has confirmed what I have been saying. That he is innocent.

“As a cricketer, I have learnt to take knocks along with accolades, in my stride.” Ahem. Knocks on the cheeks perhaps. 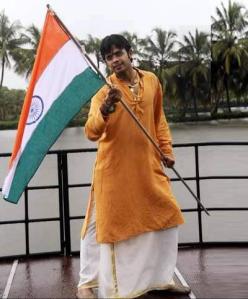 And the outpouring of support from his millions of fans on the comment thread (currently four only) shows that I am not alone in my belief in your innocence.

I don’t know what’s going to happen to you Santa-Sree. Given that there may be a “MMS video”  and given your past history of “hanging around” a certain hottie, you will be a shoo-in as the host of award-winning show Superdude, that is now helmed by Asmit Patel, also a superstud and player like you. Big Boss will also beckon and you can ask past-winner Vindoo  some tips about it, now that he too is in the slammer.

In case, (and I don’t believe this will happen) you get some jail time and you can maintain your narrative of victim-hood through it all, remember that that will be a stepping stone to something higher. Namely, a political career. Who knows? Maybe even a Member of Parliament. After all, spending time in jail is to Indian politicians what writing a “Hello world” program in Java is for developers, a rite of passage.

So fly high and onward, dear friend. We shall watch your journey with great pride and perhaps a bit of sadness.