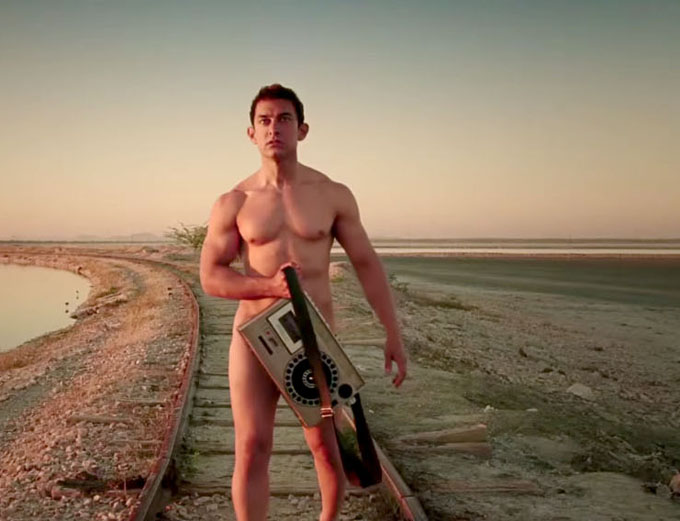 For those of you who have not seen this program, which strongly makes me believe that you are not the kind that stops at a stop sign, Satyamev Jayate can be summarized as “social activism for those of us that like to watch Big Boss but feel guilty “. It picks a certain “problem of the week”, like police reforms or corruption or doctors, and then runs through an hour of over-explaining and music and appropriately emotioned-up guests.  The USP of the program, the reason why people watch it, is of course  Method-Actor Khan (known to mortals as Aamir Khan) for whom Satyamev Jayate is a perfect prop for his carefully cultivated  image as a socially conscientious superstar. Cycling through various  expressions, “the-oh-my-God-I-had-no-idea” (“Apko police ne yeh kaha?”) as if he is hearing the guest’s story for the first time, “the-oh-my-God-I-so-feel-for-you” eyes-welling-up-with-tasteful-tears, Mr. Khan straddles perfectly that grey area between reality and choreography, between the person and the persona, and if the topic of the week does not keep you watching, or that sharp prick on your conscience if your finger goes to the remote control to change the channel, Aamir Khan’s performance sure does.

Like Satyamev Jayate, PK too has a “problem of the week”, long passages of preachy exposition, poking-in-eye messaging, and each one of Aamir Khan’s Satyamev Jayate stock facial expressions. Except being an alien, his innocent “I-had-no-idea” face makes a little more sense, though for old-hands like us, there is a bit too much of the Main Kahaan Hoon Tiloo from “Andaz Apna Apna” and one of the characters he played in Dhoom 3, for me to be overtly blown away by the acting. Just as Satyamev Jayate, despite its flaws, is an improvement on the brainless muck that passes for entertainment on Indian television,  PK is definitely better than the “Bang Bangs” and the “Ready”s, a low bar surely, somewhat like complimenting a fast bowler for bowling faster than Venkatesh Prasad.

It had a lot going for it,  like Mr. Perfectionist’s perfect derriere, though obfuscated by mist, Raju Hirani at the helm, and some funny sequences involving pee-ing, peek-ing, peekaying and anal-probing, which I would perhaps have better appreciated if I was nine years old

However it is let down by two major cinematic boo-boos.

First the climax was so god-awful that it made the baby-delivered-by-vacuum-cleaner in Three Idiots seem kind of okay.

And second, Raju Hirani becomes so focussed on the agenda, the moral at the end, that rather than let the story deliver the message, he had the message write the story. As a result there is a really weak narrative and absolutely zero chemistry between the characters, nothing like the way there was between say Munnabhai and Circuit. Instead of story and memorable characters, there are lengthy lectures facing the camera, extremely contrived situations, and possibly the most-rushed-romantic-tale I can remember, between Anushka Sharma and Sushant Singh Rajput, reminding one of the Ravi Behl-Divya Dutta romance in “Agnisakshi”,  scurried primarily because the only reason it existed was to establish the message.

The basic problem I believe is that Raju Hirani is way out of his depth in PK, biting off way more than he can chew. To be fair, it is extremely difficult to make a movie that is anti-organized-religion without coming down inordinately on one religion, and unless you are willing to go fully “equal opportunities offender” like Maher in Religulous, which again is a very difficult thing to do in a fictional setting, treading carefully is a must.

Unfortunately Hirani is as subtle as a sledgehammer, a deft touch he doth not have.

Not that I believe Hirani has an insidious bias or that PK is part of a global anti-Hindu conspiracy, which you would believe if you followed the boycottPK loony hashtag, but it is true that Hirani exclusively ends up using Hindu religious practices as his pincushion. Sure, there are throwaway blink-and-miss-it references to Christian conversions and Muslims treatment of their own women, but the focus remains firmly on the Hindu faith. It’s the man dressed as a Hindu God who runs like a coward, it’s the Hindu Gods who stand ghoul-like silent as PK prays in front of them, which happens to be the most powerful scene of the movie. The villain is a fake baba, a supposed anthropomorphism of everything-that-is-wrong-with-religion, except that he ends up as a stand-in for only Hinduism. If it was just one character, it would be still fine, but then there is another Hindu priest who is shown as a glorified pick-pocket, taking away Anushka’s wallet in a way that is more like a hood in a dark alley than a man of God. No other religion has their people in authority get consistently poor treatment.

The explanation for that, I believe, and here is the supreme irony, is fear. Like most people with a bit of common sense, Hirani knows that depicting a maulvi as a money-grabbing goonda would lead to  consequences more dire than the mild controversy that is brought on about by social-media outrage or the isolated court-case they have more than enough resources to fight, both of which incidentally are good for the movie publicity-wise. Hirani’s consciousness of “those who must not be angered” is perhaps most evident when PK, the alien, puts up signs of different Hindu Gods on a wall and, if I am not totally wrong there was also a picture of Jesus, but even PK knows, from news that might have reached him billions of light years away, that forget pictures there are some depictions of deities  you do not put on walls, if you want to keep your head on your shoulders. In that context of fear, the rather provocative line “Jo Dar Gya Woh Mandir Gya” becomes ironic, almost as ironic as an actor convicted of Jihadi terrorism in real life being blown up by a Jihadi bomb on screen.

Personally, I loved the message of PK, mainly because being a non-observant agnostic with a healthy dislike for rituals and organized religion, I agree with what the movie is trying to say. The problem is how they say it, preachy, uneven, hammy and amateurish.

And while a lack of balance may be forgiven or even blatant bias (for are we not all biased), sophomoric  film-making cannot be.