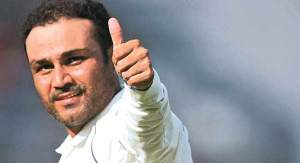 Rebels mellow. They adjust, they compromise. They buy a house, settle down, change diapers, drive below the speed limit, nod along at work to whatever the boss says, and score excruciatingly-painful-to-watch double centuries without driving through off.

Not Virender Sehwag. He started a rebel and signed off as one.

“I also want to thank everyone for all the cricketing advice given to me over the years and apologise for not accepting most of it! I had a reason for not following it; I did it my way.” [Link]

Yes he did. He did it his way. Day in and day out. He played cricket the way a schoolboy played it, pahele ball ko chauka marenge, century ko sixer maarke layenge, and he did this at the highest level, against the best of opposition, over years, on hard foreign pitches and on domestic dustbowls, all without losing a beat. Coaches grabbed him by the collar, experts urged watchfulness, and yet he never listened, he never toned it down. Some may argue that the backup provided by the greatest batting middle-order India has ever seen gave him the license to be Sehwag, but something tells me, that he would have been the same, either way.

I am going to miss the man. I am going to miss that cavalier devil-may-care-attitude, those rattling shots through the off-side, the four to start and the six to finish, the mumbling to self, and the every-shot-can-be-the-last unpredictability. I am going to miss that excitement at the pit of the stomach as he walks out to the field, sauntering in slowly, like an employee at the department of motor vehicles, back to work after a satisfying lunch. And I am going to miss swearing at him as he throws his wicket to the most bizarre of shots just when he has the opposition on their knees and then walks off the square, with nary a show of disappointment or anguish.

You made us feel alive.