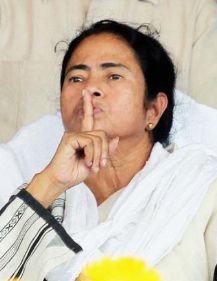 In this excellent piece in Newslaundry, titled “Dhulagarh Riots: Why did Bengal media ignore it?”, Deepanjana Pal writes:

For approximately four hours, Dhulagarh burned. Shops were set on fire in the local bazaar and looted. The mob attacked homes, looting them and lobbing bombs – crude contraptions that are far more dangerous cousins of the pataka – at them. Eye witnesses say Hindu households were targeted. “You have to understand, everyone knows everyone in places that are this small,” said one reporter. “Hindus and Muslims live in separate neighbourhoods, but together. So when this happened, some of them recognised those who were attacking them and when they didn’t recognise them, they knew these were outsiders.” One temple was attacked and its idol – of Kali, the goddess best known for her all-destroying rage – was broken. There are reports of Hindu families having fled to neighbouring villages.

All this violence took place in broad daylight. In the videos that have been circulated, no one is seen wearing masks. It’s all out in the open and witnessed by locals who tried to get in touch with journalists. From the videos and photographs that were shared, it almost seems like the locals did the actual on-ground reporting. They were desperate to talk and be heard. Unfortunately, few listened and Dhulagarh was barely mentioned in mainstream Bengali news. (emphasis mine)

“What we were told was that since this is a communal issue, we should approach it cautiously and underplay it so that things don’t flare up,” said one journalist.

The only problem with this is simply this.

It is not true.

Large sections of media, be it in Bengal or at the national level, has absolutely no problem in reporting communal incidents. They covered Dadri for months. Gujarat, 2002, they are still covering, and it is now 15 years.

It is only when the incidents run counter to their stated narrative, that India is being ruled by a fascist Hindu Hitler-wannabe who has instituted a reign of majoritarian terror, that the Indian media  behave the same way as parents do when their children ask “Does Santa really exist? If he does why is the gift he brought the same as the one that has been lying in the trunk of our car for the last two days?”, namely with silence and then with an attempt to change the conversation. In Bengal there is the other reason for covering up communal incidents. Pretty much most of the media is mortally afraid of the TMC or indebted to it (usually both),  and anything that shows the party in a bad light, a party that has been pulled by no less than the High Court for appeasement of a certain community, will not make it past the desks of the editors.

But for now, let us concentrate on our nation’s media mavens, the ones who win “Best Journalism Awards” instituted by their own channels, whose name echoes in time as the Bane of NRIs in Madison Square Garden.

You know where I am going with this.

While the riots are going on, when media involvement usually forces the government to act, when bad things can be prevented through press intervention, one of our country’s premier “journalist”s, based out of Delhi, parrots the Trinamool Congress line and denies the riots. He subsequently then puts “” around riots, in the same way I have put it around “journalist” in thie preceding sentence.

It is only after Zee TV gets involved, perhaps because their politics is more aligned with BJP, that his own channel India Today, perhaps because one cannot let a rival take the TRPs with a story, goes to the region and files a report, of helpless people having their life-savings looted, of a mother ruing her son’s irreplaceable study notes being burned in addition to having all their valuables taken, that the whole of India at least has the opportunity to look at the world, as it is.

Of course an FIR is filed against Zee TV for reporting the incident. Usually something like this brings forward a tidal wave of press outrage, of impassioned editorials and flowing pens, ruing the fascism of the Hindu majoritarians, but since this time, very inconveniently,  it was not quite fitting into their narrative, we were treated to the manufactured diversion of “trolling in social media”. Double points here, because it is an issue that personally affects these media mavens, in the same way that Arnab Goswami’s barbs did, so it’s absolutely deserving of hours of media coverage, and impassioned chest-beating. The trolls make our social media life miserable. What? Your child’s laptop, the one you saved for years, was looted, and you have no house to stay in? Sorry, pal, tyranny of distance, my moral compass just can’t point there. Here, have some quotation marks.

The irony of this kind of targeted censorship is that it ends up hurting the very agenda that is close to their hearts. Since the media will try its level best not to report a particular type of communal violence, it then becomes very easy for Hindu fanatics to cook up or grossly exaggerate incidents of communal violence, then use social media to spread their message, and people will be more inclined to believe whatever they get on their FB walls or Whatsapp,  the lack of coverage in mainstream media, perversely, validating the story: if the news channels aren’t covering this, it must be true.

India is a country where minorities are in constant peril, regardless of who is at the center. Anyone, of any religion, can be a minority, and whether you belong to a minority is a function of where you are located, who are around you and in what number, how organized they are, and who the local government is aligned with. So, yes, even in an India ruled by a Hindu nationalist party, there are significant sections where Hindus are minorities. By refusing to give coverage to violence perpetrated on them and worse by casting doubts on its truth, in one swell swoop, the media strengthens both extremes of the political spectrum and ossifies the culture of violence and intimidation of minorities, which we inherited during Partition, a culture which no party in India has the slightest interest in dismantling.

Not that our media superstars don’t know this. They are not that dumb. It’s just that their “anti-establishment” is basically anti-one-establishment, their anger deepened by the fact that the “wrong person” won in 2014. Which is why they have no compunction in echoing the TMC talking points, because they believe that TMC is also anti-that-one-establishment, even though in the context of the Bengal riots, TMC is the establishment. Which is why their moral compass keeps steady while refusing to cover or to resign to the back of the paper, anything that does not conform to their political narrative, of the fascism of the Hindu majoritarian rule in Delhi, no matter the human cost of what they choose to ignore.

21 thoughts on “Dhulagarh and the Media Narrative”