In 2007, Sonu Nigam, in a massive missive to the Times of India, introduced a new phrase or what linguists call a neologism to India’s cultural lexicon.

And then, over the years, more important things happened: Arijit Singh sung the same song a hundred times, Neil N Nikki was remade as Befuckre, the dark lord Modi and his army of Hindu savarna gaurakshak patriarchs descended from Mordor, intolerance swept the land, Rohit Sharma and Rahul Gandhi came to represent the latent talent of the country, and Kangana Ranaut took on Karan Johar and Hrithik Roshan.

Then one day, at five in the morning, Sonu Nigam woke up to some loud sound from outside, a loud persistent sound and like most people woken up at five he got mad and tweeted about it.

The sound that he heard was from a jagrata ceremony. Cranky and sleepy, he tweeted about the disturbance caused by loud singing of hymns during Hindu festivals. Then when he finally woke up in the morning, he found that he had been invited to back to back panels on NDTV and, then for good measure, to Troll Hunter and the Bane of NRI Sanghis Sardesai’s baithaak, topic of discussion being the repressiveness of Hindu festivals, environmentally unsustainable and sexist and classist, covering everything from Jallikattu to Diwali and Holi,  and by the morrow being feted by the Under Wires and the Karavans of the world, only to take his place among the pantheon of media heroes like Twinkle and Diya Mirza and Shruti Seth and Kanhaiya Kumar and D J Khaleed, brave cultural voices against the cultural Hindukritz of the current government.

Actually that was not what happened.

It was not music from a jagrata, or the sound of crackers on Diwali that had disturbed the Sonu.

What he should have done was sung “Meri Neend Jaane Laagi Hai” from Chal Mere Bhai and gone to sleep.

But he did not. He tweeted.

So when he woke up the next morning, it was to a totally different reality.

First liberal intellectual outlets pointed out that Sonu Nigam, one of India’s biggest names in playback, whose last hit had been in 2003, had done this for publicity.

If you search Sonu Nigam on YouTube, the most-watched video of all time with his name on it is the title track of Kal Ho Na Ho, a movie released in 2003. Sonu Nigam posts a few tweets about being disturbed by the morning prayer call to Muslims from his neighborhood mosque, and Indian liberals decide to resurrect Sonu Nigam in the public sphere. Nigam’s publicist must be laughing his way to the bank.

Maybe it wasn’t a well thought out conspiracy. Maybe Nigam genuinely felt what he wrote and didn’t expect it to blow up and see Sonu Nigam trending. Even so, Nigam must be very happy with the opportunity to become the Anupam Kher of 2017, a celebrity spokesperson of the Islamophobic agenda.

In one fell sweep, Sonu Nigam had become an Islamophobe and a publicity-seeking has-been, even though when you think of it, the law was on his side, and he was not,let’s say, critiquing someone’s personal religious choice

Then Sanjay Jha, who in this context can be called Jha-2 (remember Sonu Spanking was originally done by another Jha, i.e. Jha-1) and the patron saint of losers and has-beens, put Sonu Nigam in the category of failures, together with a two-time World Cup winner.

If that was not bad enough, Sonu Sood, whose only crime was to share a first name with Sonu Nigam, was severely Sonu-spanked on social media, in the way Iraq was invaded for what Afghanistan did.

Then an Islamic cleric,  one Syed Sha Atef Ali Al Quaderi, vice president, West Bengal Minority United Council, announced a reward of 10 lacs for someone who could shave Sonu Nigam’s head, a cash for kesh scheme if there was one, and not just that, but also put a garland of shoes around him, and make him tour the country.

This apparently, if we follow the logic put forward by our knowledgeable liberals, was exactly what Sonu Nigam wanted, to  revive his career through the simple expedient of being threatened by Islamic fundamentalists, and that too from Bengal, of which this is now a sunshine industry.

What happened next was stunning.

Sonu Nigam shaved his head, and demanded 10 lacs from the cleric.

Now some say he did it out of fear, because if there is anything that Sonu Nigam likes it is his hair. 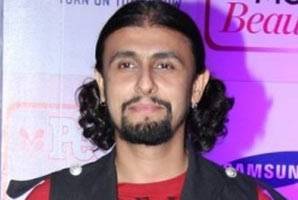 Some others, following the logic put forward by the media, say this is nothing but a scheme to earn 10 lacs, so desperately Sonu Nigam needs every help he can get.

Not that he even got the 10 lacs, because the wise Quaderi pointed out, that he was yet to fulfill the other two conditions for full payment. I hope Sonu Nigam goes on a tour around the country, though it might be difficult to procure a garland of old shoes, given that almost all of them have already been thrown at Kejriwal and can be found in the AAP’s asset vault. And if all this sounds funny and kind of silly, please do remember that a man was stabbed for supporting Sonu Nigam, an incident which if Sonu Nigam had only criticized a different religion, which would have flipped the religion of the stabbed and the stabber, would have led to awaardwaapsi and intolerance and Washington Post op-eds and demands for Narendra Modi to condemn the incident, but now will pass quietly into the white media noise, as it is goes contrary to ze narrative.

If there is anything this incident highlights, it is the ability of organized mobs, be it gaurakshaks or Didi’s fan club, to threaten and often execute violence with impunity, and the selective bias of a blighted media in supporting one side, and not the other, a world where a Gautam Gambhir or a Sonu Nigam or a Anupam Kher are failures whose opinions are desperate attempts to get attention, whereas a Sirish Kunder or a Shruti Seth or a Twinkle Khanna…I think you know where I am going with this.

And the other take-home from this.

The very real existence of the problem of spanking your Sonu.

14 thoughts on “Sonu Spanking Once Again”