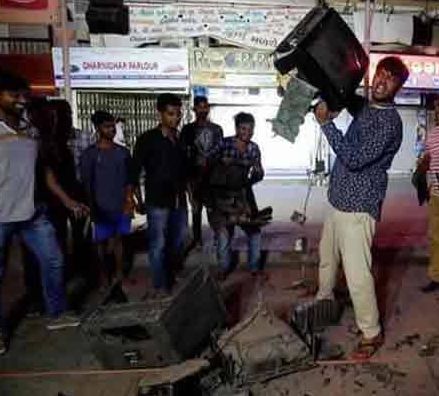 When did we lose the game to Pakistan?

No not when Ravindra Jadeja ran Hardik Pandya out. Not when Kohli got a leading edge to gully. Not when Dhoni tamely hoiked the ball down square leg’s throat. Not when Bumrah, who has made it a habit to dismiss people off no-balls, got Fakhar Zaman out for three.

We lost to Pakistan when we decided to mimic our neighbors in smashing TV sets.  We lost to Pakistan when we forwarded the message on Whatsapp that the match was fixed, or some other outrageous conspiracy yarn, or blamed IPL for making the players not care, or when we, not this has happened yet but has occurred before, decided to burn effigies of players or garland them with shoes or, worst of all, tried to vandalize their property.

Confident nations don’t do this. Because they know, or should, that their pride as a people is not defined or determined by the outcome of a game.

Of course, just like in Pakistan, they are not actually working TV sets, but dusty old cathode-ray tube dinosaurs that lost their last flicker some time in the last decade, whose last few moments on this earth before entering analog oblivion was exhausted in giving its owners a few seconds of time on a TV channel. But be as it may, the headlines of “Nation angry at humiliating defeat” to recorded clips of people hurling TV sets is the real humiliation, that channels know that people will watch this and boost their TRPs.

That does not mean that we fans cannot have a civil cricketing discussion on why India lost. Sure we can. As long as the discussion does not have these people only play for money” or “This is the result of a secret pact between Modi and Sharif” or “My friend’s brother-in-law has a friend who knows this bookie who told him yesterday, and I have proof, that…”

India lost, in my opinion, because they went face to face against a team that played a very high-risk high-reward game and, on this day, the high risk paid off. On other days, it wouldn’t have. The first time India and Pakistan played in the tournament, Pakistan went for a conservative, avoid-mistakes gameplan. Against a superior team, which let me dispassionately say India still is, this is usually not the best of tactics for the underdogs. The better team will usually make less mistakes than you. That is exactly what happened in the first game.

After that thumping defeat, Pakistan reversed the tactic. Let’s look at the final. Fakhar Zaman took insane risks while batting. Mohammed Amir bowled an attacking full length with an attacking field at the risk of the Indian openers getting off to a flier on a flat-bed pitch. The spinner came back for another over even after being pasted by Hardik Pandya.

In a post match press conference, here is what Kohli said.

When a guy like Azhar Ali, who is a conventional batsman, plays his shots, you can still have a plan,” said Kohli to reporters after the match. “But for a guy like Zaman, it becomes really difficult to stop players like him, because I think 80 per cent of his shots were high-risk and they were all coming off.

“So you can only do so much, as I said, as a bowler and as a captain when that is happening. Sometimes, you have to sit and say, the guy is good enough on the day to tackle anything,” Kohli continued.

“As I said, you can do little to control when people are going well like that, and we certainly tried to make them hit in areas that we felt it would be uncomfortable, but we just didn’t have anything going our way in that partnership (Zaman-Azhar). We tried our best to hit good areas but they just batted really well today,” he further said.

Again, to remember, it did not “all” come off. Zaman was out off a no-ball. He did not look back. Kolhi got a reprieve. He got out the next ball.

India  played its conventional, “avoid mistakes” game, as it has done throughout the tournament, buying bonds and investing in index funds and pouring over annual earnings statements, but if the opponent is putting it all on the blackjack table and winning pretty much every hand, there is no way you can match his RoI.

Pakistan today played the game they are born to play, high-risk and instinctive and aggressive, backing the raw talent of their players, and by the time India adapted to the craziness of the day with an all-out “every ball goes out of the ground” assault from Hardik Pandya, it was already too late.

In conclusion, there should no be denying that as a cricketing nation, in the limited overs games, we have gotten better. Our current crop of Indian players are fitter, win games more consistently than the generations we grew up idolizing, and while they are not and may never be Australia under Waugh and Ponting, and Windies under Clive Llyod and Richards, this have established themselves, over the past few years and over all kinds of surfaces, as one of the world’s top-ranked cricketing nations.

Now waiting for some of the fans to catch up to that standard.