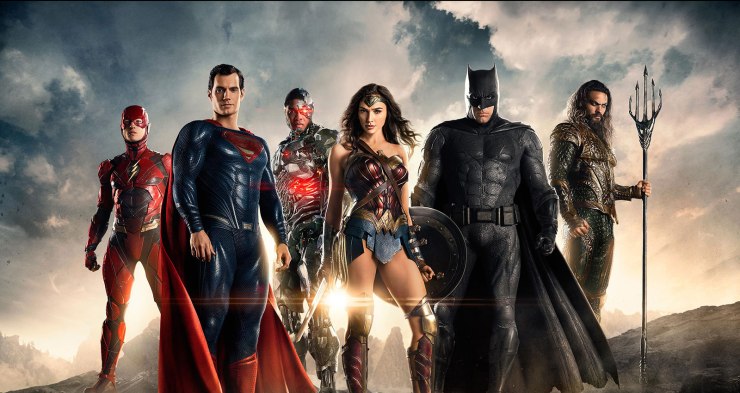 In the Saif-starrer ‘Surakshaa” (not to be confused with the Gunmaster G9 one), the  climax brings together a spectacular team of hitherto antagonistic protagonists and they signal their alliance by singing and dancing.

Superman is dead. And naturally if your last boyfriend is Superman, it is difficult for anyone after that to measure up. So Lois Lane looks on the world with Nirupa Roy “Aaj woh hote” eyes and bonds with her saasu-ma, Martha Lane, who has been made be-ghar and who, if you recall, had been at the center of the “Oh my mother name is Martha too” resolution of Superman v Batman, a resolution that was very Rajendra Kumar vs Pradeep Kumar.

Batman is not doing well either. In the opening shots, he is shown fighting a giant mosquito, of the kind that would be found near Dunlop at Bon Hoogly stop, living in the kochuri paana (water hyacinth) covered dirty bowls of stagnant ground water. Even though he squashes the mosquito like an uncle at Binapani Mistanna Bhandar would do with a rolled up copy of Ganashakti, things are only getting worse. Wolf Blitzer’s evil CGI twin, Steppenwolf, who looks like a bouncer at a German S&M club with headgear bought from the bargain counter at Partycity, seizes an ancient box from Amazon without being a member of Prime, unleashing mayhem with his Dengue army of evil flying minions, who we are told smell fear, as any self-respecting mosquito from Naihati to Barrackpore does. There are three such boxes we are told, very Infinity Stones like, which if put together will allow Steppenwolf to destroy the world and why does he want to do that well because he is evil.

With Amazon broken into, Batman and Wondewoman try to recruit superheroes to his team, a task they find out is as easy as a TCS recruiter looking for mainframe programmers who want to work in Fortran-77. Aquaman, who I presume is shown to be Bengali based on his love for fishes and his buff body, flips him off. Wonderwoman tries to recruit Cyborg, who seems to have become genetically fused into a tin foil, and who seems to always be angry, as if he is getting a bill from Fortis every day. Batman has better luck with Flash, but he comes quick and is desperate for anything. Then Steppenwolf and his Dengue army attack Atlantis, seize the second box, pulling Aquaman into action, but he finds out he has been fired by Mamata Banerjee for acknowledging the existence of the said mosquitoes, and so he has no option but to join the Justice League. Other bad things happen, and a dangerous plot is made to bring Superman back in from the dead, and if you want to know if they succeed, watch Justice League in theaters this week.

Or better not. Justice League is constructed with less care than a Rohit Shetty movie, who truth be told, handles multistarrers much better than Synder and Wheldon. Justice League seemed to have been made by studio executives sitting together, barking commands like “Thoda comedy daalo yaar, bahoot serious ho gya” and “Thoda intensity yahaan”, and “Action chahiye, kya yaar, aur CGI daalo behenchod”. What comes out is a mess, characters having an intense conversation and then suddenly there is humor, and everyone seems unhappy but no one knows why, a miasma of fraud angst hangs around every frame, and just when Flash builds up a bit of watchability, in comes the terrible Steppenwolf with his plans of universe destruction, and an army of mosquitoes.

And so spoiler is this. It happens. The universe is destroyed but the DC one. And as one disastrous entry follows another in this franchise, no one it seems can save this.

Not Superman, or Kejriwal or Modi or Rahul Gandhi or  Sunil Shetty (he was the Superman in Surakshaa).