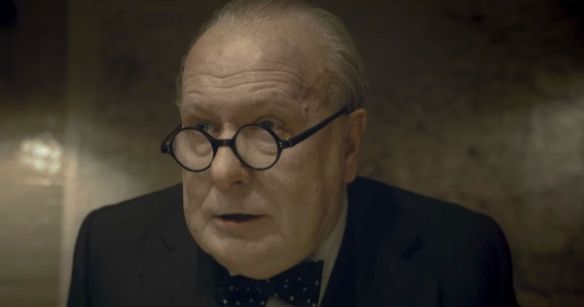 Whether for good or bad, the Oscars have, over the last few years, become super political. What used to be a few jokes, a few reaction shots, a few fashion flaws, and gush talk about movies that people claim to have seen but really haven’t, has now become almost political theater, with issues of representation, racism, colonialism, police brutality, sexism, harassment, front and center in glittering marquee lights. Some may say that by moving away from being an anodyne apolitical platform, the Oscars have somehow recaptured its relevance, its mind space, that the Oscars are water cooler talk again, even by people who have never seen or will see the Shape of Water, a love story of a human and a fish, one you can see for free at any Bengali lunch.

Given how woke the Academy has become, their decision to recognize, with one of its premiere awards, “Darkest Hour”, a hagiography of British war-time Prime Minister and unapologetic South Asian killer Sir Winston Churchill, is beyond reprehensible. Maybe in the 80s and the 90s, when no one cared, I would not have batted an eyelid, but now, now given the widely tomtommed sensitivity on the part of the Academy to the recognition of marginalized narratives, the fact that the Committee chose to reward a movie that airbrushes Churchill’s role in the genocide of 2 million official (some say it is close to 4 million) in India and Bangladesh, just goes to show that not all marginalized are treated equal,  and that Churchill being the savior of Europe still gives his reputation the immunity from having to answer for his crimes in India.

So what exactly did Churchill do? The sad thing is not many in India know this, far less those outside it. I will spare you the history lesson, but in brief, he made sure that all the food and clothes produced in Bengal  got sent away to feed and clothe European soldiers during World War II (yes the same war for which “Darkest Hour” presents him as the messiah) leaving the natives to starve. If that was not bad enough, he actively prevented humanitarian aid from reaching Bengal once millions had started dying. This was as much due to his desire to scorch-earth Bengal before it fell to the Japanese (that never ultimately happened) as well as the fact that he hated brown-skinned Indians, and considered them sub-human.

This is not conjecture. This is documented.

Churchill’s only response to a telegram from the government in Delhi about people perishing in the famine was to ask why Gandhi hadn’t died yet. (Tharoor, Time magazine)

“I hate Indians,” he told the Secretary of State for India, Leopold Amery. “They are a beastly people with a beastly religion.” The famine was their own fault, he declared at a war-cabinet meeting, for “breeding like rabbits.” (Tharoor, Time Magazine)

The prime minister believed that Indians were the next worst people in the world after the Germans. Their treachery had been plain in the Quit India movement. The Germans he was prepared to bomb into the ground. The Indians would starve to death as a result of their own folly and viciousness.(Harper and Bayley, Forgotten Armies: Brittan’s Asian Empire and War with Japan)

There is very little, once you think about it, to distinguish Churchill and Hitler in this respect. Both suffered from intense pathological hatred of certain races, and both put into places policies whose ultimate result was mass genocide. Now imagine Hollywood recognizing a movie about Hitler that just shows him as a Bohemian artist in Austria, and just stops there. That wouldnt happen, but still, might fly because  it’s not as if something is being hidden, pretty much everyone knows what Hitler did.

The problem is very few know the same about Churchill.

Or at the very least the guy winning the Best Actor playing Hitler would not have saluted Hitler, in the way Oldman saluted Sir Winston Churchill in his Oscar acceptance speech.

I think we can all at least agree on that.

Which brings me back to “Darkest Hour”. What it really is is the latest installment of the colonial project to cast Churchill, the high priest of colonialism, as a savior of freedom, the man who stood between Europe and tyranny. In order to avoid diluting the narrative, it is imperative on the part of the apologists and the standard-bearers to keep hidden the small matter of  4 million people dying through starvation so that Hitler could be fought.

I would hide it too myself. After all, the “blood, toil, tears and sweat” rhetoric doesn’t sound all that inspiring once you realize that those body fluids were extracted from little children lying dead in the gutters of Calcutta, from men and women fighting with dogs for scraps of rotten food, from zombie like armies of the unfed walking the streets chanting in unison “Phyan chai” (Some water of rice please).

Lest I be misunderstood, my problem isn’t in making a film on Churchill.

Now I understand that a European white life was “more” than non-white Asian and African lives was a fairly common and accepted sentiment for the times, and I am not one to judge people of old by the standards of today. Charles Dickens thought pretty much the same about Indians (“I wish I were the Commander in Chief in India …. I should do my utmost to exterminate the Race upon whom the stain of the late cruelties rested … proceeding, with all convenient dispatch and merciful swiftness of execution, to blot it out of mankind and raze it off the face of the earth”). But he just thought, he was never in a position to do anything.

Churchill was. That deserves mention. That truth deserves consideration in the myth that is being propagated.

The counter-argument to this would be that the Oscars are recognizing excellence in cinema, and that Oldman’s performance as Churchill is what is being recognized, not Churchill per se. That I would have accepted if this was ten years ago, because the Academy was then an equal opportunities offender. Now it is not. Now the powerplayers in Hollywood and the Academy are rebranding cinema, the most impactful of all popular art forms, and with it the definition of excellence. A film is evaluated not just by the standards of acting and cinematography and all the stuff you thought you understood in film studies, but also critically by the standards of representation, justice, how well they represent narratives of the marginalized, in how they change opinion, in how they influence the creation of a so-called better world.

Given that this is now the standard, and I am not getting into whether it should be, there is no excuse for ” Darkest Hour” to make the cut. It retreads the same old colonial Eurocentric narrative,  anything that happens in Europe is significant, anything that happens in the other continents is not,  and that lives lost elsewhere, even four million of them, in the pursuit of saving Europe, should not be considered worthy enough to sully the heroism of Sir Winston Churchill.

26 thoughts on “Darkest Hour at the Oscars”