As Indian cities struggle with dwindling supplies of water, prompting even Leonardio Caprio, the man who died from too much water in Titanic to tweet about the dangers of too little, it is worth remembering today the great film Mohra.

Released twenty-five years ago, almost to the day, many scientists blame it for triggering the water crisis that has swept the world. According to legend that was spread over the Whatsapp of the day, during the shooting of “Tip Tip Barsa Paani”, a song featuring Akshay Kumar and Raveena Tandon, entire oceans were drained through the action of drenching reporter Roma Singh played by Raveena Tandon, as she danced on the roof under a deluge that would make Noah keep his ark tethered to the shore, while Akshay Kumar, observed the effect of buyoancy and Bernoulli’s equation in real-life fluid conditions, and then decided to become a Canadian citizen. This song, over the course of twenty five years, has led to much wastage of wetness, and to this day, remains a popular staple of Bhojpuri orchestra performances where water is poured on the dancer to the tune of this song in tepid simulations of the original, with nary a concern for the environment.

But to limit the scope and impact of Mohra to just this one song is like dismissing Sistine Chapel as just a painted ceiling.

Mohra is a cinematic milestone, the kind of movie that not influences a genre but who you choose to become. Released a month before Hum Aapke Hain Kaun, which would irrevocably change the face of Bollywood with chocolate, lime juice and “mausam ka jadoo hain mitwa”, Mohra was the last Elaan-e-Jung of the old Bollywood action potboiler, before the Barjatiyas and the Chopras and the Johars would flood out the genre forever with their pink slush of fraud NRI-nostalgic romantic sugar-water.

Inspired by Death Wish 4, Mohra almost had its thunder taken away by an earlier released inspired by the exact same film. Called Bhookamp (Earthquake) it had the legendary Rahul Roy dancing to “Tum jo mile gulshan khile” with Mamata Kulkarni, but for reasons I shall never understand like how Devang Gandhi never became Don Bradman, it sunk without a trace.

Mohra though was made of sterner stuff. Akshay Kumar, Raveena Tandon who was the real hero of the movie, and the joker of the pack, Sunil Shetty (then without the “e”) ably backed by Paresh Rawal and Naseeruddin Shah, this was 90s cinema at its very best.

Superhit tunes from the Amit Shah of techno-qawwali, Viju Shah.

The most poetic excuse for an unintentional breaking of wind in “Chalee kaisi yeh pagal pawan main kya karoon”.

But all of this pales in front of the most bizarre ending of the era, something straight out of David Lynch, with Naseeruddin Shah,the villain, who rather than escaping from the clutches of the hero, chooses to waste precious time trying to humiliate him, first by making him get down on his knees, then slap himself and then finally making him take off his pants, while giving live commentary “Pantloon utaar raha hai, Baat accha hai” in the deliriously happy tone of Manjrekar when a player from Mumbai plays well, while all the while Sunil Shetty screams Naheeee naheee, which would inspire years down the road, some of the most iconic sequences of Dhadkan, the last great 90s movie ever made, again starring the two leading heroes of Mohra. 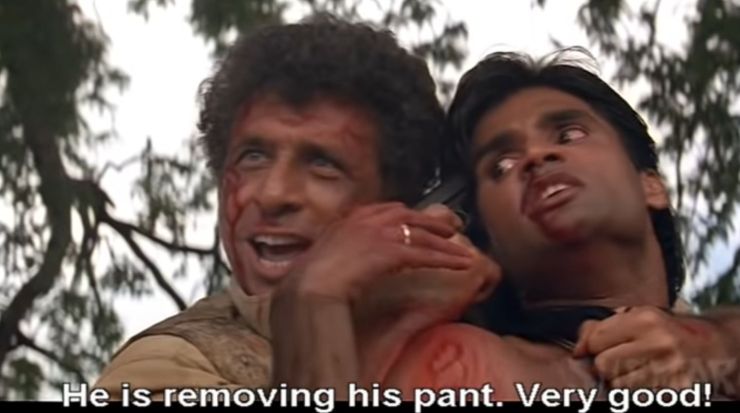 Twenty-five years ago. All of this happened.

Seems just like yesterday a twenty-something with oversized glasses walked into a single-screen theater elbowing through the crowd steaming with sweat and expectation.

Seems just like yesterday, that watching Hindi films was fun.