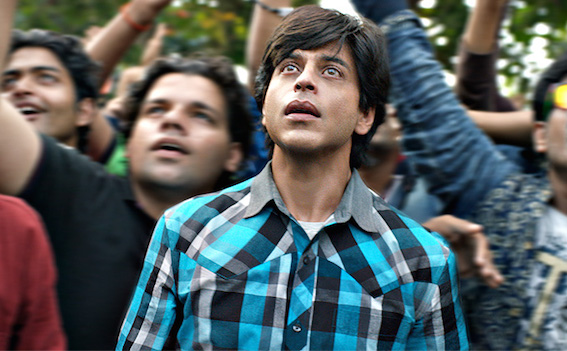 There are two Fans.

One, if you look a bit closely, is about the relationship between the devotee and the God (and no I am not talking about the Sachin biopic), of the blurred lines between devotion and fanaticism.

Gaurav Chandna, a small-time superstar impersonator and obsessive mega-fan of Aryan Khanna, the in-film surrogate of Shahrukh Khan, takes a pilgrimage to Mumbai, hoping to get “five minutes” from the object of his devotion. But once there, he realizes that his God is not interested in giving “even five seconds of his life” to him, and that his over-the-top gestures of devotion are not only not appreciated but leads to his idol pulling strings and getting him beaten up in jail. The rejection leads him to turn on Aryan Khanna, as he embarks on a journey to destroy his God and at the same time, seek his acceptance.

This Fan goes to places most conventional mainstream fare from the Hindi film industry does not. First of all, it takes love, obsessive love, away from the man-woman sexual dynamic, and transposes to another context, as addictive, and potentially as destructive.

Once you realize that most modern religions began with the establishment of this kind of intense collective faith in one person, and that religions and cults and star-fan-clubs all subsist on this emotional compact between the individual, the fan, and a God, be it a man or just an abstract ideal, you wonder why we don’t have most explorations of this, one of the most basic and yet inscrutable of our instincts.

Without going too deep, for after all this is not art-house. Fan skates around some deep questions.

Does God care for our love? Does He understand it?  Do we really lose faith in our God, even when we say we do, or are we just trying harder for his attention?

And then there is the other Fan.

A lazily-plotted, childishly-written modern Bollywood star-vehicle, and this happens mostly post-interval, which requires not just the suspension but the obliteration of disbelief, straight out of the Rohit Shetty school of film-making.

That Fan works, despite this cinematic schizophrenia, is because of Shahrukh Khan. He plays the character rather than Shahrukh Khan, ironically in a film where one of the characters is Shahurkh Khan. Returning in many ways to the edginess of his origins, he reminds us that there is no one in Bollywood that does obsession better than him. What though could have degenerated into the boilerplate nostril-shaking and eyelid-quivering, mercifully does not. He makes Gaurav Chandna sympathetic and sad and relatable, and one wonders why he does not play the “every-man” more, as opposed to the hands-extended hammy romantic Rahul  caricature that he has reduced himself to over the years, and through this playing-the-character-and-not-the-persona, Shahrukh Khan reminds me why I was once his fan.

Yes I was. And I have said this before, on this blog and elsewhere. Not a fan in that I had his cut-outs all over my wall, but a fan in that I dressed up as his character in Ramjaane. Like Gaurav Chandna, I too lost my faith, and no not because Shahrukh Khan would not take five minutes of his life to give me a hug, but because he made Duplicate. And then Ashoka. And then everything that followed.

The fact that an obviously-talented actor would lock himself up in a creative strait-jacket, just for the sake of more and more money, was for me, too big a sell-out.

But with Fan, the Fan in me wants to believes he has said “sorry”. In a way. Not a perfect apology, not even close. But at least something. I know there will be more Dilwales and Happy New Years, and I understand why that will be, but as long as there is something like Fan, once in a while, I will be quite happy.

And maybe, consider being a fan once again.