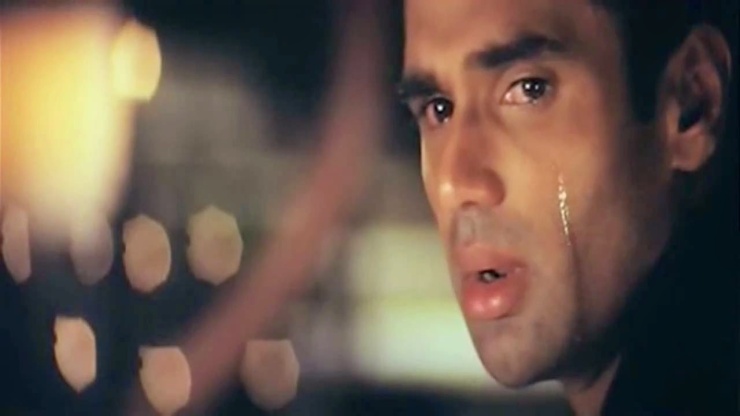 There were times during NDTV’s vote-counting coverage that I wanted to reach inside my TV and give the panelists a hug. While Prannoy Roy sat throughout with the expression of Casey Affleck in the police-station scene of “Manchester By the Sea”,  Srinivasan Jain and others went through a range of emotions from Suniel Shetty’s “Naaaaiinnn” from Dhadkan to Nargis’s tear-drenched lip-trembling when she sings Raja ki Aayegi Baraat in “Aah”. Not that there was something particularly novel about this, we had seen similar during the 2014 general elections, but then watching grown men and women, on the verge of an emotional breakdown on live TV,  is somewhat sad.

Ok all right. Who am I kidding?

It was actually fun.

After India’s surgical strikes against Pakistan, I had introduced the Kübler-Ross model to readers of the blog. To repeat.

The Kübler-Ross model, or the five stages of grief, postulates a series of emotions experienced by survivors of an intimate’s death, where in the five stages are denial, anger, bargaining, depression and acceptance. [Wiki].

The reason why sections of the Indian media, the NDTVs and the Wires, are throwing tantrums that even a three year would consider excessive, is because they have yet to complete all stages of grief from 2014.

Let’s look at this in a bit of detail.

First phase of grief is denial.  This phase starts even before the elections. In 2014, it was “Modi will lose” and “Modi will lose in Varanasi itself”, and in 2016, it was that Kejriwal would win Punjab and Goa, in a canter, and that Akhilesh Yadav and even Mayawati (depending on which expert you were listening to) would make surprisingly solid performances. Demonetization would be an election-breaker for BJP, Rahul Gandhi would finally, after fifteen hundred similar headlines over the past ten years, take charge of Congress’s destiny, and Kejriwal would emerge as the leader of the resistance. This was not just opinion, it was packaged as fact, through pre-poll data analysis, no less. Of course this is what happens when you first fix your conclusion and then massage the facts to establish that, and any of us who have ever tried to “verify” Ohm’s Law by measuring current and resistance in the Physics lab knows what that is,  the data says “1 mA,” and you put “12.5 mA” in your lab note-book so that the plot looks straight.

The next stage, anger, they also live through. When Omar Abdullah, yet another darling of the “NDTVs and the Wires” of the world, says that the opposition should give up on 2019, and concentrate on 2024, he is lashing out in anger, and this impotent rage is reflected in a cross-section of sentiments. that come floating on my social media feed.

In other words, Indian democracy would be functioning properly if there were no Indians in it. Yeah, figure that one out.

Then there is bargaining, like Srinivasan Jain, trying to convince everyone, but mostly himself, that even though the BJP had crosses 300 seats, people in UP really love Akhilesh Yadav.

Like Rajdeep Sardesai, who actually did call UP for BJP before the elections, maybe to reverse-jinx but I am not sure, whose narrative is that Modi’s appeal great as it is, is that of the conman, done achieved through smoke and mirrors and rad communication skills, as opposed to any tangible record of achievement.

Second, it appears that Narendra Modi has successfully bridged the Delhi-Lucknow divide in a state election. His opposition may label him an ‘outsider’ fighting the ‘UP ke ladke’, but the fact is, Modi has struck a chord in the Indo-Gangetic plain. In his adopted village of Jayapur near Varanasi, the road has been washed away, the solar panel batteries have been stolen, the toilets don’t have water supply, and yet, every villager one meets, including in Dalit bastis, says they will vote for ‘Modiji’. In Varanasi’s paan bhandar, traders admit demonetisation has hurt them, but they still chant ‘Har Har Modi’. And on the banks of the Ganga at Assi Ghat, a mahant says the Namami Gange project is eyewash but he will still vote for the PM.

As to politicians, not named Modi, here is what the narrative is.

Again, the attempt to draw a comparison with Bihar doesn’t quite work. In Bihar, a Nitish Kumar had addressed core issues: Roads, electricity, and crucially, law and order and women’s empowerment. In UP, Akhilesh Yadav¹s ‘kaam bolta hai’ slogan resonates only in pockets: There is a bit of a ‘UP Shining’ trap in the glossy advertisements that showcase the Gomti riverbank in Lucknow but you can’t ignore the darkness in a Gorakhpur village. And while his emergency crime helpline is a laudable initiative, the image of the Samajwadi Party ‘rowdies’ still haunts the party. Akhilesh could still be the future of UP with a strong youth connect, but may not be its present: “We’ve tried Maya and Yadavs, ek baar Modiji ko bhee chance dete hain!’ is an often-heard refrain.

So summarizing. Modi is evil but gives impression of good.

Akhilesh is good but gives impression of evil.

Want more bargaining? Here is one more, ladies and gentlemen, from the Bane of NRIs again. [Link]

It is this constant hunger and desire for success that separates Modi from star politicians before him. Indira Gandhi was just as popular and authoritarian but maybe less driven (she actually had interests beyond politics!). The BJP’s original Lucknow poster boy, Atal Bihari Vajpayee, was charismatic and arguably a much finer public speaker; but he clearly lacked the ruthlessness that is part of the Modi persona. The Atal-Advani era was a gentler one and the BJP was still an exclusivist party struggling to shed its Brahmin-Bania upper caste image.

The Atal-Advani era, lest you forget, was when a mosque was destroyed in UP with one of Atal-Advani standing there, and riots took place all over the state and the country because of that act, and yet the art of bargaining has reached such a stage, that we are asked to remember them as “gentle”, in comparison to Modi, whose violence has been shown in the last two years only on old denominations of notes. Yeah Jogai-kaku in fish market has no bargaining skills compared to this level of moral maneuvering.

Then depression. I don’t think I need to give any examples on this one. If you saw election results night, you know exactly what I mean.

Which brings us to the last stage. Acceptance. And here lies the problem with India’s so-called “liberal” (liberal in “” because they are anything but what the word means in the English dictionary) media.

They skip going through this phase every time Modi wins.

In 2014, Modi’s victory was sought to be de-legitimized by calling into question the very nature of the Indian democratic “first-past-the-post” system, which these same people had been perfectly fine all these years. And now, Modi’s victory is being de-legitimized by providing a platform for and amplifying the fantastic theory of tampering of EVM machines, the same EVM machines that led to embarrassing losses for BJP in politically important states like Delhi and Bihar not so long ago.

Reminds one of Rakhi Sawant, minus none of what makes her endearing.

And because they skip going through acceptance, their wounds never heal, and they suffer multiple rounds of false-predictions, false-hopes, meltdowns, and blame-everyones.

Trying to trivialize the enemy, or to blame the system of democracy or the people who inhabit it, is just not a winning strategy. If the “liberal” media wants to defeat their enemy, namely Modi and Amit Shah, the first thing they need to do is to understand how they do it, how they have cobbled together a caste-alliance in UP, beyond repeating the “communalization of Jat votes” micro-narrative, and how the hell, did they make such a strong play in a place like Manipur, so far away from their traditional world of Hindi-heartland Hindu nationalism. To understand, they need to collect data with an open mind, as opposed to what they do now, which is to look at data that supports their world-view, and pretend that the other facts will go away if they don’t report it or deny that it exists.

They can, of course, keep trying to create media martyr heroes, from Kejriwal to Nitish Kumar to Kanhaiya Kumar and Umar Khalid and Shehla Rashid, hoping that one of them will stick, and provide them platforms on their channels, their conclaves and thinkfests, and run campaigns like “intolerance” and “awaardwapsi”. The danger starts when they start to believe in their own messaging, or to quote Scarface “get high on your own supply”, because then they react to election results as a fan does when their team loses, as opposed to supposedly neutral arbiters and interpreters of facts.

Till the time they come to accept this, large sections of the media will continue to appear as they do now—angry, petulant, and partisan.

And what they should realize is that this only makes their dreaded and hated Modi look even stronger.

10 thoughts on “The Five Stages of Grief Once Again”